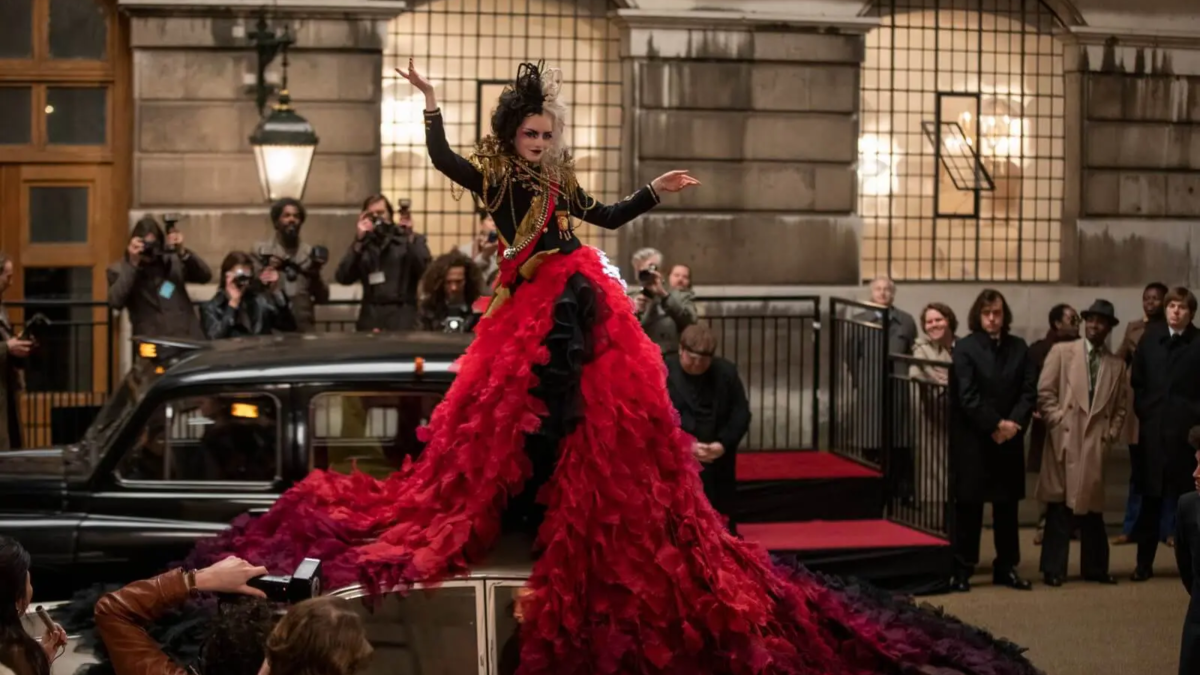 Cruella Movie starred by Emma Stone tells the story of the most wicked Disney villain. BAFTA-winners Fiona Crombie and Alice Felton created a unique aesthetic. In the rebellious 70’s London, Cruella de Vil, in the skin of Emma Stone, is dressed by the Oscar-winner costume designer, Jenny Beavan.

Disney has made the debut of Cruella, a movie that is more for grown-ups rather than children due to The Devil Wears Prada resemblance. The Cruella movie tells the story of Estella, the orphan child that dreams about becoming a fashion designer but ends up being a puppy hunter. Nevertheless, design producer Fiona Crombie and set designer Alice Felton did their part when designing the movie’s set. Joining them to create a visual story, costume designer Jenny Beaven brings eccentricity and wilderness to Emma Stone’s character using Vivianne Westwood. Because ain’t nothing more British and rebel than Vivianne Westwood, right?

While Jenny Beaven tells the story of Cruella throughout her clothes, they express the punk-rock movement of the 70s Londoner. They are also expansive, loud, and provocative. As a matter of fact, they contrast with the costumes of Baroness von Hellman, interpreted by Emma Thompson.

Baroness von Hellman wears the 50s and 60s Dior-inspired outfits. Classy, conventional, in cream and brown hues. Cruella is the opposite in looks but not in villainy. Both costume and set design express this contrast between old and avant-garde, conservative and provocative. And, in the case of Estella, de young Cruella, between rich and poor.

The young Cruella is poor, orphan, and aspires to be a fashion designer and live a life of abundance. Baroness von Hellman is a fashion designer and lives the life Estella wants to live. Both live under the roof of a Georgian-style home. However, Estella is surrounded by scarce comfort and a lot of molds. Contrasting to this, Baroness von Hellman lives in a modern palace. This contrast tells the story of the lost glory of the good old England, which eventually leads to the emergency of the punk movement.

Fiona Crombie and Alice Felton are experienced in designing palatial sets since the duo signed The Favourite scenarios for Yorgos Lanthimos.

The office of the Baroness is actually a great display of the work of Fiona Combrie and Alice Felton. The due sourced vintage furniture from shopping trips in London’s Golborne Road, Chelsea, Kings Road, and the Sunbury Antique Market in Kempton Park. Their purpose was to become this fictional story a little more real—authentic vintage furniture to make it a little more real. So besides telling the story of nurturing Cruella, it tells the story of an impactful time in contemporary history.

Again space tells a story. In the studio of Baroness von Hellman, the upper floor allocates her office. From there, the Baroness overviews and controls her workers. This disposition states the status difference between the Baroness and the others, including Cruella. The character of Emma Thompson is rich, privileged, untouchable, and heartless.

A mix of vintage and modern tells the story of Cruella and 1970s England. Both set design and costume design use pops of color. Regarding costume design, burning red is the color of choice by Jenny Beavan.

Big Sean's Beverly Hills House - Including Its Own Nightclub

Australian Interior Designers You Must Know About - The Top 10

Inside 9 Most Famous Hotel Rooms in the World

Sonoma Escape into the Woods – Pick Inside this Lovely Home

Portofino Splendido Mare Hotel – The Parisian Duo Behind the Project