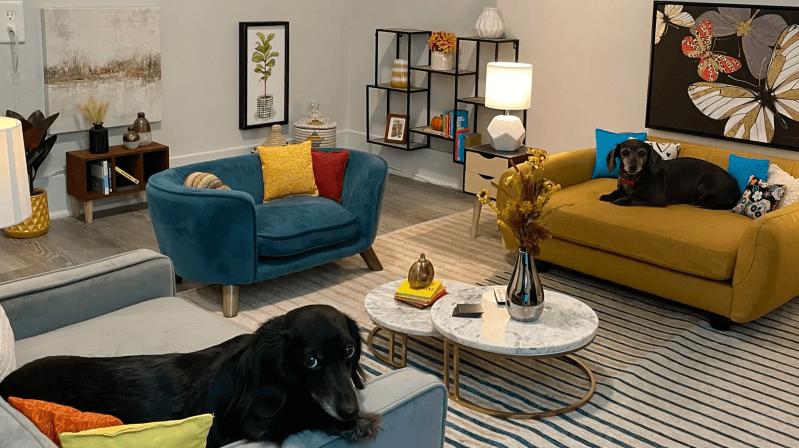 This article will present you with an emerging movement regarding interior design: pet room – living rent-free and comfy.

The concept of a pet-friendly home used to mean having stain-resistant floors and non-toxic cleaning supplies. Now, we have been testimony to an emerging phenomenon in interior design: Pet room. With more and more videos and photos shared on social media channels, this movement has gained more and more popularity as people are looking for both a creative therapeutical and a truly useful space.

Peaches, Challah, and Mitzi are the design-obsessed dogs of Benjamin Mazer, an Atlanta-based ER doctor. Fan of midcentury-modern decor, their living room features clean lines and geometric shapes, plenty of large windows to bring the outside world in, with a lot of plants.

On any given day, you may find all three of them kicking back and watching TV on their curved blue velvet loveseat or their mustard sofa, with a gold bar cart just a few steps away for when night hits.

The living room is fully designed by Benjamin to fit them. It all started from a practical need as the designer was always worried about the dogs when he wasn’t home. When Peaches was younger, she passed through a surgery for a herniated disc that she got from jumping off of human-sized furniture. Thinking about him, this whole project started.

Initially, it was very casual and the main goal was to just put them in a room with some dog beds and make it their own room. Then, he found a dog sofa on Wayfair, and the idea of doing this project popped into his head.

This room is a living art project for which Benjamin was responsible, called The Mini Living Room. The designer shared it on TikTok and Instagram and it became impressively famous. Everything displaced in the room was well thought and having in mind the three low-rider dogs which still bug a lot of the viewers’ minds regarding the size of the furniture.

The trick to understanding the Mini Living Room is knowing that most of the objects are actually people-sized things, just put to use differently. For example, the round wood end table is actually a cake stand, and the floor lamps were originally desk lamps for people. The coffee tables are charcuterie platters, and the bar cart is a vanity shelf from Target.

Although, not everything follows this line of thought. Benjamin also made a lot of the furniture from things he found in stores such as HomeGoods, TJ Maxx, or Marshalls. They have tons of little things like jewelry boxes and small decor items and the designer explains how he made it: when you look at the shapes and objects rather than just what they are technically made for a lot of options are open.

One of the console tables is made from an upside-down candle holder with a cutting board attached to the top. He used a child’s desktop organizer to create another end table, which he painted and attached wood legs to the bottom of it.

The Mini Living Room is always changing, which is the funniest part on the project for Benjamin, the dogs, and his followers. Since most of the things are made from others, the designer insists it’s not an overly expensive project to keep up with.

When Kelsey and Ryan, the couple responsible for the brand Newbuild Newlyweds, were looking for a house, it was a top priority for them to have extra space to create a room for their cat, Stella. In their last place, they used the storage space under the stairs to create a farmhouse aesthetic space for their pet.

Stella’s new home is pink with gold accents, with line-drawn cat wallpaper and gallery wall featuring pictures of her family. She has got a baby pink sofa with her TV in front of it, an Amazon Fire tablet, and an en-suite bathroom.

The pet room started as two cedar closets with a bunch of dead space in the middle. The couple took all of it down to studs combined with the middle area that became the main bedroom.

Kelsey say that this is a cool way to keep the cat’s things out of the way but still have a stylish area. In fact, the couple are always questioned the reason to do it and create a specific pet room for their cat to what they always reply the obvious answer “because it’s fun”.

The couple have been renovating the house for seven months at this point and after the whole process they needed some fun project that make them feel good and happy about it.

Similarly, Peggy White made a room for her cat as some kind of therapy in the middle of the grieving process when her vet told her that Herman, her cat, had kidney failure and would soon pass away.

Create this special place was both a way of honor Herman, giving him a safe spot for the last bit of his life, and also provide a quiet place for her other cats, Frankie and Gulliver. It all started naturally with a simple mural on one wall and by hanging macrame bed. It was the kickstart and then Peggy started to add other things to it. Today, the room has multiple catwalks and shelves for the animals to jump on, a mini disco ball, a dance pole, and even a small tribute to Herman. When she decided to share this pet room on TikTok, the video quickly went viral and people were commenting surprised of how their cats live better than them.

If the pet rooms are more for the animals or for the owners we don’t know, but we have to give the credit to the creativity and a little elbow grease to honor the animals we love should never feel like a waste of energy. All the owners expressed how fun it was to do it and how their animals loved the space as it serves the purpose while being adorable.

A COOL AND STYLISH CALIFORNIA HOME BY KATIE HODGES