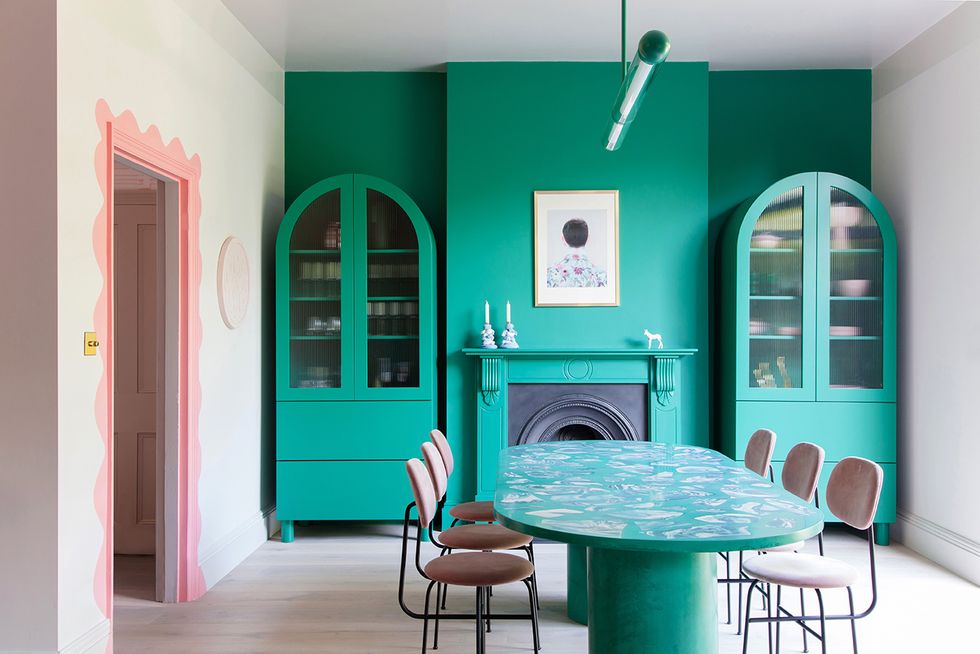 The industry’s most renowned maximalist experts share their top designer picks. It includes all the chromatic color schemes from the warmer and energetic yellows to the colder and iconic blues

Nowadays, where minimalism is everywhere, who has an maximalist eye is king. Having this in mind, there are some designers inspiring their creations using some principals of maximalism per base. The movement supports itself on bold colors and patterns getting the attention of those who admire it.

Adding this touch of daring might sound overwhelming for some, but it can also be considered a way to direct the attention into the main element on a room. Although, choosing the right paint colors can be a difficult task. To help, this article aim to explain some ideas to inspire and expend your perspectives with this maximalist designer point of view . On one hand, this maximalist principals can be used as a strong statement but can also lead to upstage the rest of the décor if not correctly done messing up the overall design turning it into a complicated topic.

The most difficult part is getting a nice balance between the eye-catchy and the neutral look while keeping it cohesive and visually appealing. Although, this is not the only concern to the topic. With this, comes up new worries such as the lighting conditions as well as the preferred undertones . In this article will be presented 9 favorite colors from 9 different designers to make a statement and nail it bold and beautifully .

FTT-012 by the designer Mylands

This color is above and beyond any trend and remains timeless according to this designer. It evokes rich forests and deep seas bringing nature inside. Green is considering calming and has a powerful connection with outdoors bringing nature inside and increasing the well-being sense, relating it with a previous article explaining the trends for this year of 2022 .

This color works beautifully with our favorite pinks, sky blues, lilacs, and earthy tones. In this example, the color appears as a turn of events with a monochromatic wall contrasting with the other painted in pink and white which can be unique surprise in such a neutral space according to Jordan Cluroe and Russell Whitehead, 2LG Studio

Sunshine on the Bay347, the elected by Benjamin Moore

This style go mainly for the black, white and yellow – colors sometimes avoided and feared but if well played and adding in plenty of white and natural materials like the example shown above it might result on something really interesting in a designer point of view . This represents the vision of Celerie Kemble on Kemble Interiors.

Milano by Studio London Co. by the designer Travis London

The designer shows the love for a darker mossy green. As so, he have painted his living room in the shade Milano, which is one of the colors of the upcoming project on Studio London Co. , a paint line that is debuting in late summer 2022 . Travis London explain that this color reminds him of Italy- rich and multifaceted which inspired him to create it on Studio London .

Benjamin loves a strong yellow especially in the kitchens. Regarding this perspective over this color according to him it feels bold and dramatic but also a bit like what a kitchen should loom like. To do it, Benjamin said that exist two colors he prefer the most being the one presented above and Benjamin Moore Showtime 293 on Frances Merrill, Reath Design .

Often, Sasha’s style is inspired by art and this color reminds her of Yves Klein blue. Usually she use to use this color in studies or libraries due meaning of this color which represents wisdom and knowledge. It is electric enough to inspire but can still be connected with nature and be calming according to the designer Sasha Bikoff .

Rayman Boozer is all about the bold yet calming blues. Regarding this case of this design, Big Country Blue was the star. It is beautifully saturated and creates a breeze on the space.

During the process of selection, the designer confessed it was difficult to choose the painting color, having in mind the objective to express “a playful tone for bold art and fabrics” without looking childish . It was a challenge and, for a second, made she questioned herself regarding the use of this color but her instincts keep going back to it as it looks fresh, happy blending the whole environment all at once . This pass a feel of happiness and bring up an artsy energy to the room according to Lisa Gilmore

This color is positive and optimistic giving a special shine to the room. Sunburst is graphic and not subtle being all about energy on this Ghislaine Viñas’ design.

Babouche No.223 by Farrow & Ball used by the designer Dabito

Dabito likes to paint a door or an entire room yellow. On his perspective, it is cheap and cheerful way to make a home more vibrant and fun to the overall design. Besides that, the color gives him a lot of joy as he has some fond memories of yellow growing up, like choosing Lisa Franck folders to pick out yellow curtains for his room in high school . Even though the regular youth association to the color. Even though, it is a versatile color and can also be luxurious and a very sophisticated color .

Townhouse in NYC – What Secrets Does it Hold?