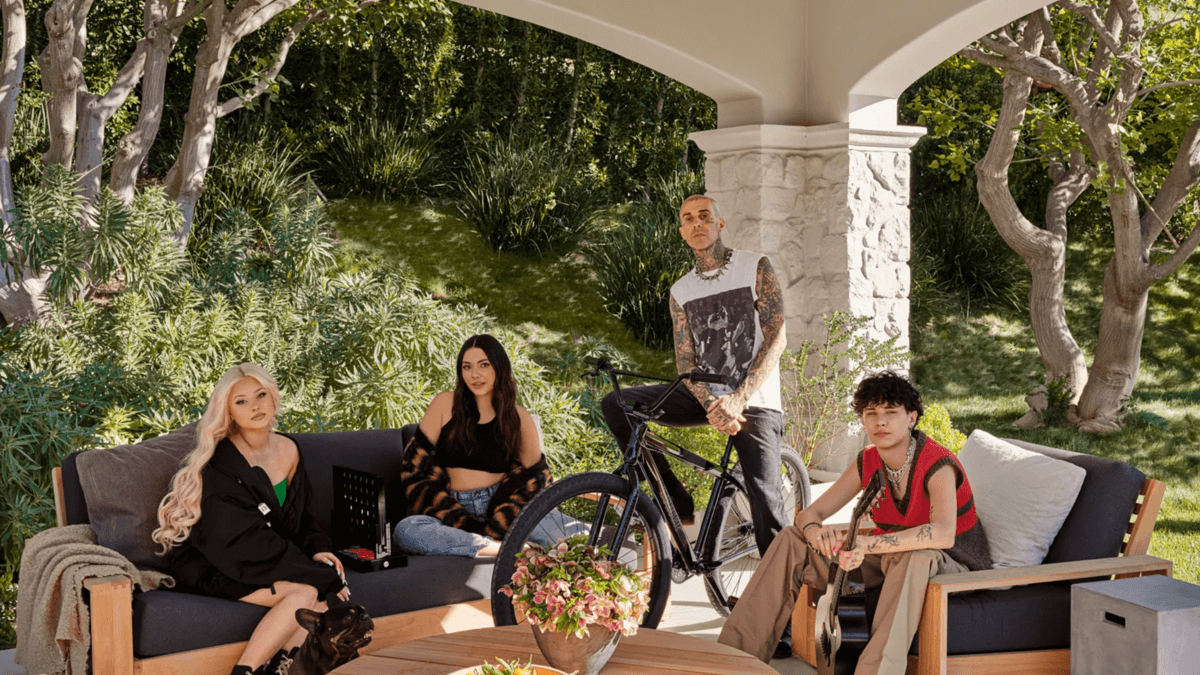 Travis Barker has had a full, busy schedule this springtime. In just four weeks, the famous Blink-182 drummer worked with Machine Gun Kelly on his album; performed with Reba McEntire at the Oscars; played with the rockstar Lenny Kravitz and H.E.R at the Grammy’s before returning to the studio to finish Blackbear’s newest release.

We cannot forget that he married his well-known fiancée, that’s now his wife, Kourtney Kardashian, in Las Vegas, without a license. The couple really tight the nod in a breathtaking place, Villa Olivetta, in Italy.

When Travis Barker needs to relax with his family and friends, he comes to his beautiful home in Calabasas. He lives there with his three children, Landon and Alabama Barker, and Atiana De La Hoya.

He owned this home for 15 years, but it was just three years that he decided to renovate it. Thanks to his mother-in-law Kris Jenner he reaches out to famous AD100 designer Waldo Fernandez.

Travis wanted a simple and inspiring home. The drummer admits that his previous homes were nothing like the Calabasas’ home. However, in this phase of his life, he wanted a house where he could enjoy time with his kids, plus Kourtney’s kids. Therefore, the designer used a subdued color palette, tailored upholstery, warm wood, and custom furniture.

In that case, the dining room has a big table for all the family to be in. In the game room, usually on Sundays, they all get together for a vegan meal, do puzzles, and play board games. Or simply, they hang out and watch movies.

Coming into his room, the rockstar has an antique French worktable and bench and a bespoke chaise longue. His bathroom has a beautiful bathtub in silver clad. In his closet, we can see the custom Goyard case with a skull that Kriss Jenner gift him.

The designer had a minimal approach for the kitchen, as Travis wanted. It is a beautiful all-white kitchen with a built-in coffee maker and a matcha stand.

Travis Barker loves skateboarding and BMX racing. Additionally, design has been in the musician’s blood for a long time. In addition to being the co-owner of Don’t Trust Anyone, Barker launched a collection of skull-themed homewares. Everything from drum keys to candle holders.

An Apartment In The Heart Of Paris Full Of Natural Tones

The Art of Dining to Celebrate

LOOK INSIDE THIS OUTSTANDING FRENCH FARMHOUSE 

Mexico Resort – Where Sustainability is The Main Concept