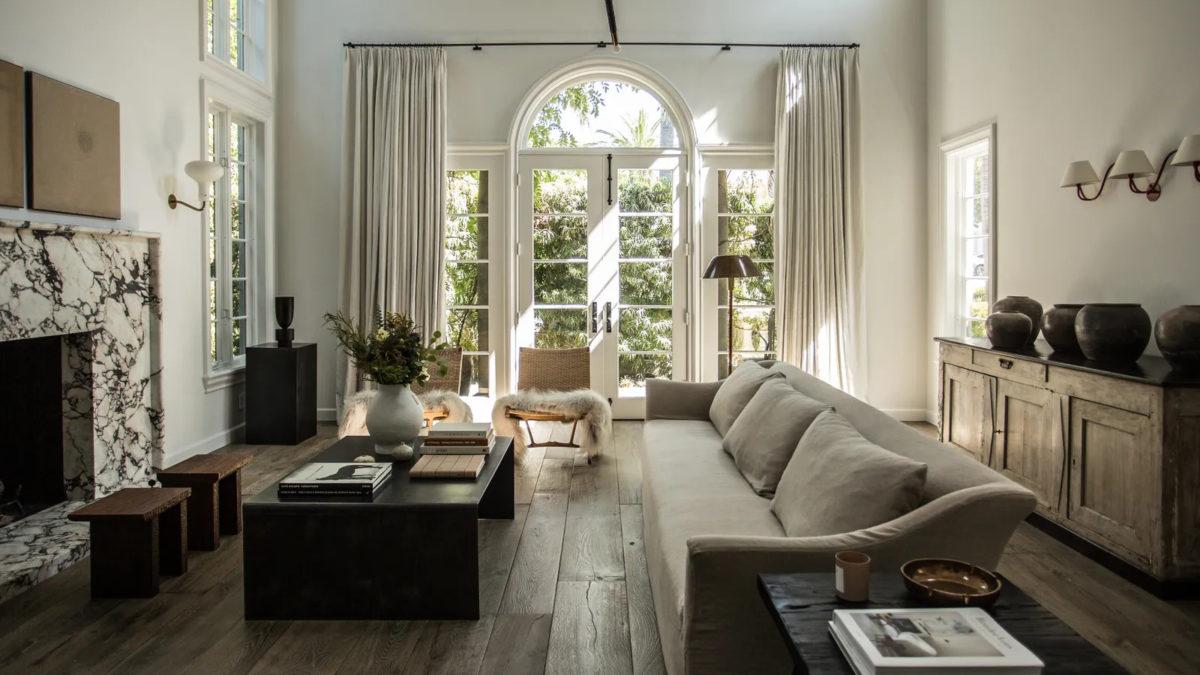 Peek Inside This 6 LA Dream Houses

From Hancock Park to Malibu, these massive places are undeniably serene, bright, and airy. Truly a LA dream material.

LA, as the city of angels, can perfectly be the scenario for a dream home and the citizens make sure they truly do it. Whether focused on silver screen glory or the California good life, these residents know how they want to live their best life.

With it, the options are endless from which we will show you 6 amazing ones that play with natural light and neutral materials with the view of Hollywood flair hidden in between.

During a tour around multiple houses in LA’s historic Hancock Park neighborhood, the designer Jake Arnold found this gem. Though it was in need of updating, the Tudor-style home with quirky details charmed the group. It was a welcome change of pace compared to the clients’ single-story residence.

Nonetheless, there was much to be done. The interior was originally extremely dark and dreary, and the mock Tudor features felt a bit too literal with overdone crown moldings and paneling. The designer peeled back some of the fluff to let the home’s architecture be the star. Overall, the project directive could be described as straightforward simplifying and refining the environment.

A Malibu House Located Far From the LA Coast

Far from the turist area and following up the solitary nature of the house’owner is located this place. It is a family house the designer Vanessa Alexander shares with her husband Steve, a Hollywood agent, and three teenage sons shifts the idea of what makes an iconic Malibu house, an unique remodel connected to the land, not the ocean.

This project was finished only weeks before the pandemic struck and proved to be the perfect place to be away from the world. The owners don’t have a view over the ocean but the mountains and big trees. This is a remarkable part about this landscape is the painterly quality of the light.

A LA House That Values The Cool Neutrals and Natural Light

The designer Jake Arnold’s eight-month renovation project in the Drs. Jason and Jessica Diamond LA home provides an elegant lesson in expeditious decorative transformation. The existing house had, 80’s glam vibes well present which was inconsistent with the subtle and sophiscated mood chosen by the designer and the homeowners.

It all started from taking out the dated elements of the decor. Notably a host of elaborate moldings and column details, overwrought, faux-limestone fireplace surrounds, and track lightning.

Sometimes, take the street view is all you need to fall in love with the project. This was the case with a circa-1922 Mediterranean Revival in the historic LA neighborhood of Hancock Park. In the early 2020, real estate developer Tyrone McKillen,cofounder of Plus Development, and his wife Christina were looking for a place to live forever with their family of five with the possibility of growing. They used to live in an isolated spot in Beverly Hills and after years loooking for a place with a five-bedroom adobe with a terra-cotta shingle roof and a balcony bursting with blooms. Just one block away from their original residence tugged at their heartstrings. But, what it take to turn this house a home? Change everything inside.

That was what David John Dick, co-principal of Silverlake, California-based Disc Interiors, a decade-old firm Dick founded with his partner Krista Schrock. McKillens had found Disc through Instagram, with the approval from mutual friends. This design was focused on the modern vibes mixed with the original historical details.

A Malibu Mansion That Brings the Outside Inside

Every accessory tells a story, and this home is the proof. As the resident of this house, the tastemaker behind The Particulars, an online fashion platfrom, Melissa Akkaway have been incentivising the readers to find their own personal style for a while. After commissioning a new Malibu house for her family of four with the help of the decorator Redmond Aldrich Design and the architects Marmol Radziner, she understood how much accessorizing fits into a residence too in this LA place. ON this 7600 square-feet abode, designed with powerful decorative pieces allied by the architectural vision to create memories in and out.

The project took 4 years to be accomplished as they wanted everything perfect for a long-term residence. It all started by approaching the fashion appeal of the owner and how her closet was displaced. This LA place is an example of how you can infuse the way you live into the design.

The novelist and television writer, Patrick Somerville, and his wife Alexis didn’t resit the idea of living in this LA home.

For nearly a decade, they extended their Silver Lake rental, considering the possibility, in someday soon, they could move back to Midwest, where they both are from and raised their kids. Although, when the Somerville’s miniseries Station Eleven got chosen by HBO Max and all his plans for the production start, the couple realized it was time to return to the origins in Southern California.

They always loved the Silver Lake’s laid-back, family-oriented vibes. So they made an offer on a 1920s hillside property with attractive Tudor lines and leafy backyard whose views stretched all the way to the Hollywood sign. This place was an absolutely catch! It was recently remodeled with turn-of-the-century charm with run-of-the-mill finishes and an unfavorable layout.

They bought the house for its potential, however, they knew they would have a whole process to let it as they wish. This was their first purchase and, as so, the was a extremely panicking process for them but, thanks to their good friend Meghan Eisenberg, an interior designer they could make it. THe designer worked at Joan Behnke & Associates and had just open her own studio. Eisenberg helped them find a good architect, Jeff Troyer, who proceeded the project, relocating the front door and adding a central hallway, new bedrooms, a pool deck, and even 1000 square-feet of a new living space carved out of a crawlway on the site’s downslope.

Impressive projects right? Where is your head right now?

Color enthusiast? 5 ways to add some color to your home design

San Francisco’s Home Remodeling – by the hand of Miles Redd

How to Decorate your Entryway Project Like a Pro

J.H. Architecture – The Transformation of a Chinese Modern Club