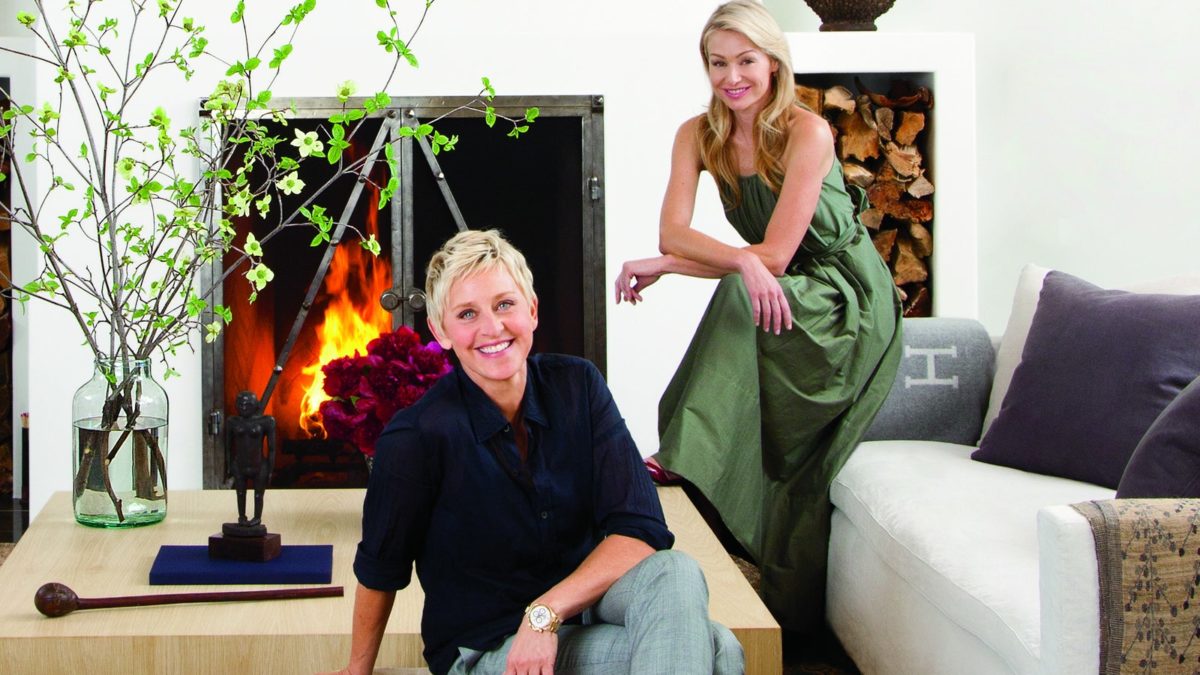 Ellen DeGeneres and her wife Portia bought recently their third Montecito Home for 2.9 Million Dollars. Besides this one, they also have two more properties in Southern California.

Ellen DeGeneres always wanted to have a home of her own. But, did she know that once she bought her first house, a passion for Real Estate would appear. Well, it did!

Her Spanish bungalow in West Hollywood was Ellen’s first experience with flipping houses. She fixed up the house and then sold it. She realized that once you make some improvements in a house, then you can sell it and obviously make money.

The expression “make money” doesn’t cover the whole picture, as you’ll see. In 2020 DeGeneres and De Rossi sold a Tudor-style home to Ariana Grande for 6,75 million dollars – just after buying it for a little more than half that price. Another example is that they bought another house for 33,3 million dollars and this year sold it for 47 million dollars, estimated price. But there is something important to say about all this, Ellen doesn’t do this for the money, she really loves real estate and when she sees a home that she loves, she always wants to give her personal twist. According to Ellen DeGeneres, “I’ve never bought to sell. I always say, ‘This is it. I’m never moving,’, but then that never happens!

When she started to host The Ellen DeGeneres Show, she bought a Hollywood Hills Home for 6 million dollars. After 3 years, she sold the four-bedroom property to Will Ferrell.

Ellen bought this mid-century style Hollywood home in the year when she started dating Portia and paid 1,275 million dollars. It was called “The Tree House”, due to its 2,000 square feet of outdoor living spaces. Then she sold it for 2,1 million dollars after one year to Heath Ledger. Then, Josh Hutcherson, The Hunger Games star, put it on the market in 2019.

During the year 2007 the Nemo star, acquired a mansion in Montecito, California, for 15,75 million dollars, and then sold it for 5 million more, 20 million dollars. This property was later used as the spot of Kris Humphries and Kim Kardashian’s televised wedding in 2011.

This was the year when the couple decided to ramp up their real estate activity. They paid 29 million dollars for a 9200-square-foot property. According to Architectural Digest, Ellen and Portia said “It was a really beautiful property and we loved it there,” DeGeneres wrote in her book, Home. “In fact, we got married there.” In 2012 they sold the home to Ryan Seacrest for 37 million dollars.

Also in 2008, they bought a horse ranch in Thousand Oaks, California, for 8,5 million dollars. For Ellen, it took only 12 short months to renovate and then sold it in 2013 for 10,85 million dollars.

The Malibu Home they bought for 12 million dollars and sold it one year later for 13 million, to the one and only, Brad Pitt.

Ellen DeGeneres and Portia De Rossi choose, for their next purchase, a Skouras Residence. Designed by the architect Hal Levitt for 17,4 million. Of course, they sold it in 2013, for 20 million dollars.

The real estate portfolio continued with a Wallace Frost-designed Montecito estate, for 26,5 million in 2013. After 5 years, they sold the outstanding property, with a tennis court, a badminton court, and a lap swimming pool, for 34 million dollars.

Let’s continue this journey, with an A. Quincy Jones-designed Holmby Hills home (called the Brody House), which they bought for 40 million dollars. Then they sold the property for 55 million dollars, only 6 months later. Sean Parker, the Napster founder, bought it.

That same year, Ellen and Portia shelled out 13,2 million dollars for a pair of adjacent condos in LA. After three years, they sold both residences for 11,85 million dollars.

The condos we mentioned earlier, might have been a loss. But, they had a significant profit when they bought a home in Beverly Hills villa for 16 million and sold it three years later for 35 million dollars.

His name is Rancho San Leandro and it is considered a historic property in Montecito. After they buying it for 7,2 million dollars, they sold it to Sean Rad, the Tinder Founder, less than one year later, for the amount of 11 million.

Also in 2017, they dropped 18,6 million dollars on an amazing Mansion in Carpenteria, California. Two years later, sold it to the make-up tycoon Jamie Kern Lima, and her husband Paulo Lima, for 23 million.

Beverly Hills is an automatic choice, this time a Hollywood Regency-style Mansion was the chosen one. Designed by the architect John Elgin Woolf for 15 million in 2018. After a few months, they said goodbye to their home and sold it for 15,5 million dollars.

2018 – Santa Barbara ranch was included in their real estate portfolio for 6,7 million dollars. Brian Robbins, the Nickelodeon president, bought it for 6,98 million dollars.

At the beginning of 2019, they dropped 27 million dollars on a singular five-bedroom, 10-bathroom, mansion that is known and Salt Hill estate. In 2020, they sold it for 33,3 million dollars.

In May of 2019, Ellen and Portia bought the home of Adam Levine and Behati Prinsloo for 45 million dollars. And in March of this year, they sold it, availed in 47 million, according to The Wall Street Journal.

The coupe purchased one of the most unique homes, a three-bedroom Tudor in Montecito, California. This one was constructed in England in the 1700s and later brought to the US. DeGeneres and De Rossi paid 3,6 million dollars for the home, and in June of 2020 sold it for double. Ariana Grande was the buyer.

Still, in 2020 they bought a four-acre property in Montecito with several buildings for 49 million dollars, and we can consider that this was one of the most expensive sales in the area.

We can only say that this Real Estate Portfolio of Ellen DeGeneres and Portia De Rossi is even more complete. At the beginning of this month, they bought their third Montecito Home, in California, for 2,9 million dollars. This one is situated on less than an acre of land near Butterfly Beach.

How To Add Texture To Interior Design