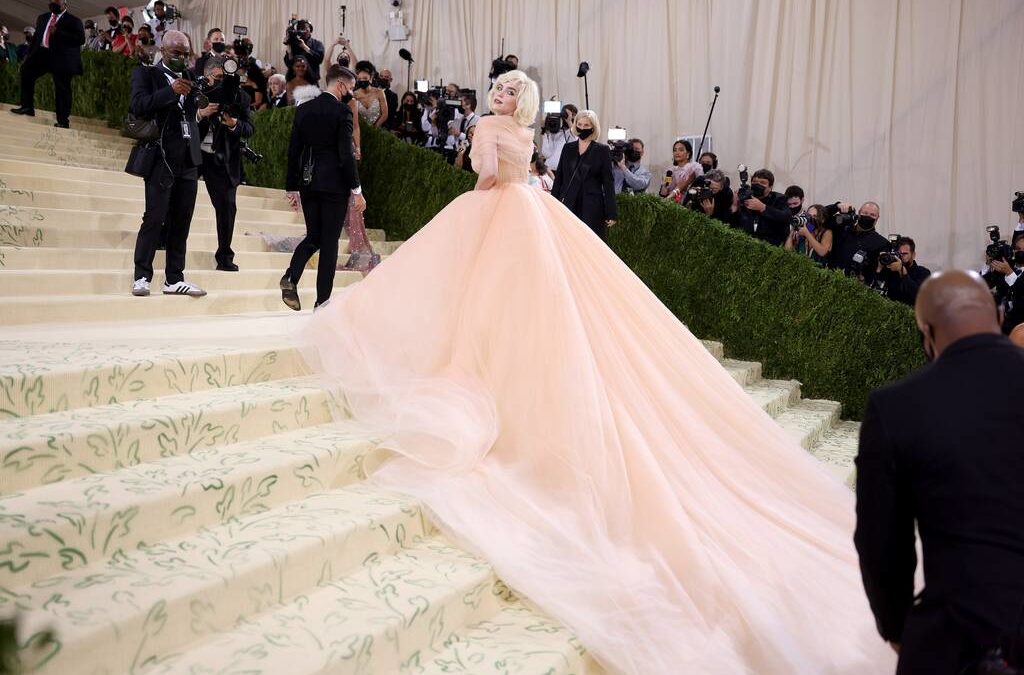 In America: A Lexicon of Fashion – the theme of the Met Gala 2021. This year’s most exclusive ball paid tribute to American fashion, its culture and its designers.

The Metropolitan Museum of Art aka Met in New York hosted the most glamorous night of the year, after its inevitable absence in 2020. Properly vaccinated, the elite reunited to dine in style and opulence and to inaugurate the Met’s exhibit.

Here are the best, the worst, and the mixed-feelings dressed of the Met Gala 2021 night.

Lil Nas X is having the time of his life. Breaking records in the music industry, his long-awaited album Montero is launched on 17th September with fire collaborations with Miley Cyrus, Doja Cat, and Sir Elton John.
On the Met Gala red carpet, he surprised the audience with a 3 layer outfit. An opulent golden cape, followed by a Star Wars golden armor, and finally a Black-Panther tracksuit covered in crystals. Designed by the long-term fashion house collaborator Versace.

Another beauty in Old Holywood charm. Kendall Jenner got all eyes on her in this Givenchy dress. Just like Billie Eilish, Kendall Jenner replicates the timelessness of the most glamorous age of American fashion history.

If someone got the theme of Met Gala 2021’s theme, it was Ciara. Showing up in a neon green gown, she celebrated both American strong sports culture and fashion design in a single dress. It is far from boring, very well executed, and heavenly styled.

Effortlessly, Megan Rapinoe nailed one of the best looks of the night. Themed and perfectly tailored, the vivid red suit and the funky shirt were spot-on.

A badass and always killing it. Rihanna got us used to big and extravagant red carpet moments. She’s the queen of the Met Gala. This year she showed up wrapped up in a squishy black Balenciaga dress, properly adorned with diamonds on her head and neck.

Colorful and optimistic, the look of Jordan Alexander pays homage to the cultural layers of the American culture. Diverse and liveness. However, the top is too tight and the skirt is too heavy. Overall, the outfit just feels uncomfortable.

Conscious consumption is required in high fashion and we love to see a vintage haute couture moment. The Tik Tok star Addison Rae was very much into the theme of the Met Gala 2021. Unfortunately, the preciousness of her dress was also her curse. The archive Tom Ford for Gucci didn’t allow the needed transformations to achieve a proper fit. We love the dress, but it doesn’t love Addison Rae’s beauty and body.

The Game of Thrones actor arrived two years late to the 2019 Met Gala. Too much eccentric, it would be a stunning goth look on the camp edition. But In American, it is displaced.

We recognize a queen when we see one, and Donatella is all that. A queen, determined and authentic. However, her dress for the Met Gala 2021 is just too much… Versace. The straps, the decorative metal trimmings in gold, the Medusa as the focal point of the dress. It feels like Versace merchandising. Nevertheless, shout out to the skirt’s tailoring and fabric.

Red was the color of the night, but not everyone nailed it. This Vera Wang red gown almost worked on Emily Ratajkowski. But that flower bouquet on the shoulder didn’t allow the look to make it.

Even though the black Saint Laurent dress of Hailey Bieber is stunning, that’s not what anyone expects to see on a Met Gala red carpet. Nevertheless, it is the lack of fierce in her body language that undermines the outfit. We would have loved to see a confident Hailey Bieber rocking that black Saint Laurent dress. Yet, ain’t nothing wrong with her outfit opposing her husband’s look. Justin Bieber’s Drew House suit is just messy, especially the fit. While the jacket is too tight, the wide-leg trousers are just too loose.

America is still a heavily patriarchal society. We love a moment of social and political awareness, yet calling out to “Peg The Patriarchy” is a very patriarchal approach to the problem. On the one hand, it undermines the feminization of males (which is considered as weakness rather than strength). On the other hand, it perpetuates the sexually abusive nature of the patriarchy.

On a night in which everyone is trying to impress with voluptuous shapes and fabrics, Kim Kardashian went to Met Gala 2021 covered in black head-to-toe. According to the reality star and entrepreneur, what is more American than a t-shirt?
We love the idea of anti-glamour behind the Balenciaga look. If only Kim weren’t wearing full Balenciaga all these days.

Perhaps the most controversial moment of the Met Gala 2021. The Congresswoman wore the infamous “Tax The Rich” gown. As a representative elected in New York, AOC is invited to the Met Gala as any other politician of the New York circle – to get in touch with the work of The Met Museum in the city.
If we love a political moment, we have mixed feelings about AOC’s statement. Is the Met Gala exactly the right place to speak about it and provoke the millionaires and billionaires of the fashion, cinema, and music industry, or is it slightly ironic to blend in with the elite? Time will tell.

Fine Art in The Most Sumptuous Places - How Does it Work

Tiffany & CO. Campaign With Beyoncé and Jay-Z Shot in Bel-Air