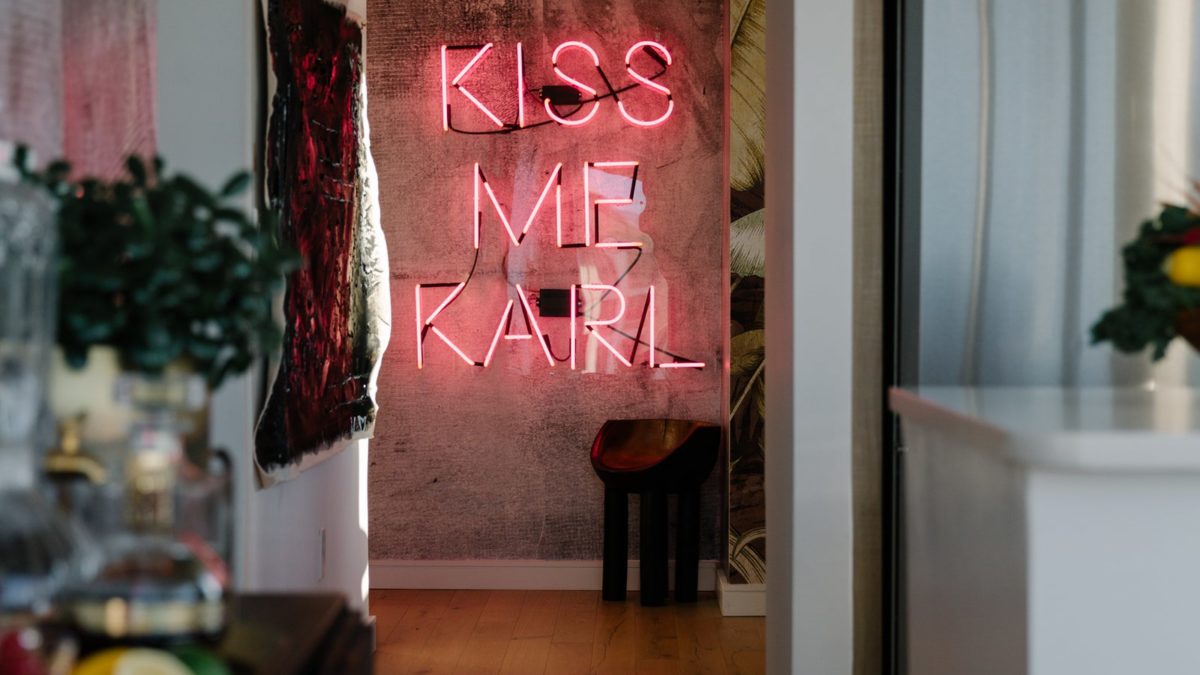 Alvin Wayne needed a home that was an extension of New York City’s nightlife and we think that he did exactly that. Let’s find out!

This Long Island City apartment has one bedroom and standard finishes. In here there will be moments for photos and furniture set for conversation. Alvin wanted this “You know when you’re out with friends, and you’re ready to leave the bar and head back to someone’s place?” he asks. “I was looking to make that my place.”

From the first moment he wanted en enhance the vibes to the apartment, and the first step was the entryway. According with Wayne “This ‘Kiss Me’ neon sign was on display [at a party for] Karl Lagerfeld’s makeup collection, and a friend of mine [who was the store manager] told me about it. Now when people walk in, they know they can have fun here.”

The kitchen didn’t need much change, the interior designer only added a Kelly Wearstler lighting fixture, that he always wanted.

Both the mirror and wallpaper belong to CB2, the wallpaper gives a sense of style and purpose, but the mirror helps with light around. So everything is in some way, connected!

The bedroom needed to be moodier than the rest of the home, according with Alvin Wayne. He has a CB2 Bed and an amazon rug to complete the set.

Regarding the bathroom, Alvin says that needed a change, so as he loves graphic art, he applied the black and white wallpaper. Curious thing, he used a X-acto do it and it took two weeks to finish the work.

Alvin believes that “My apartment basically has the same amount of real estate, and so it’s all about creating a feeling. When you put a space together that’s functional yet beautiful, that’s an experience.”. This entire home is a love letter to Alvin, something that he always wanted to create!

AD100 for 2022 – Most Brilliant Interior Designers and Architects Part III

Get Inspired by these 15 Game Room Ideas