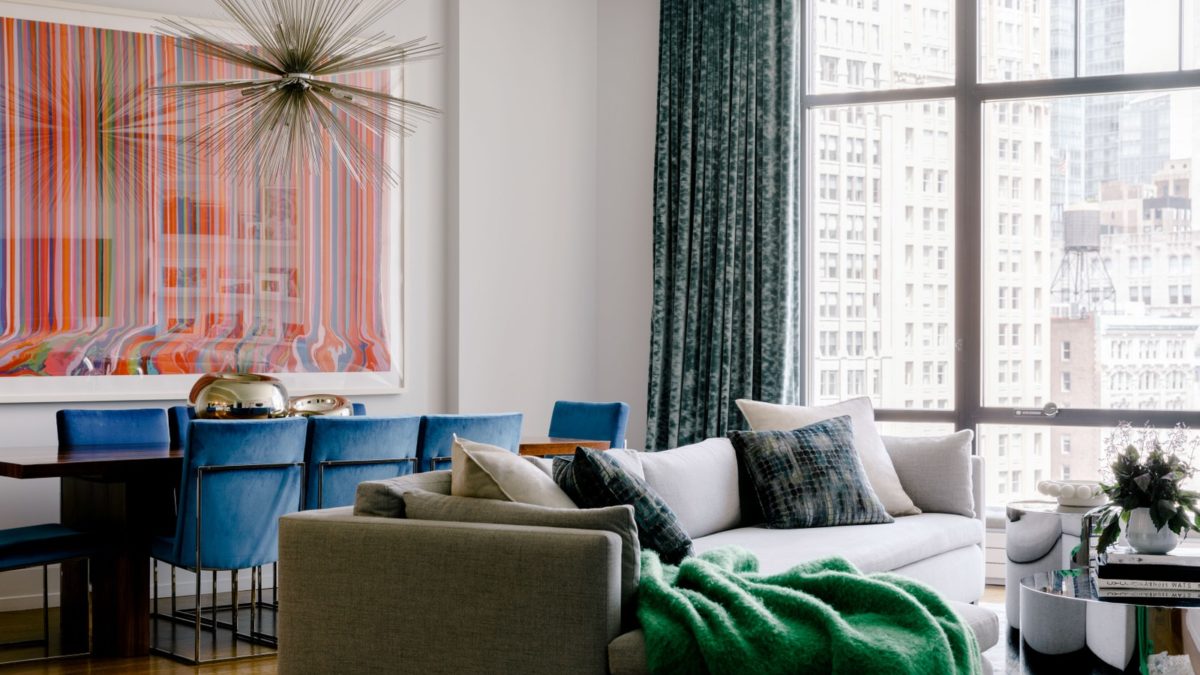 Blogger and designer Arielle Charnas, with 1.3 million followers on Instagram, a clothing line with Nordstrom, and two adorably sweet daughters, is one of the most well-known social media influencers in the world. So it’s no surprise that her 2,900 square-foot New York City apartment’s design is just as enviable as all the clothes in her closet.

Charnas moved into her new apartment with her husband Brandon and two daughters, Ruby and Esme, a little over two years ago. “We were obsessed with the apartment when we saw that view from the living room,” Charnas told Architectural Digest of her Flatiron 4-bedroom home overlooking Madison Square Park. “And we loved how open it was; there was really not much work to do to the home besides decorate it.”

Charnas turned to longtime friend and interior designer Hilary Matt to help bring their vision of a traditional, yet slightly modern home to life — which of course, included an enviable master closet with floor-to-ceiling shelving for her nearly 200 pairs of designer shoes.

According to Charnas, Matt has a great eye which helped a lot in making the process easier. Matt was also able to push Charnas in the direction of more color instead of her favored neutral palette. The dining room may be the best example of this color pairing, where a set of electric blue dining chairs by Milo Baughman and blue-green custom drapes from Carleton V stand out against the off-white walls. The brightly hued painting near the dining room table is by Ian Davenport.

Like it is easy to predict, the color scheme is more playful in her two daughters’ rooms. Three-year-old Ruby’s is a riot of rose. “She wanted pink and rainbows,” Charnas says of her toddler’s request. Ruby’s carpet is indeed rainbow, specifically a checked Missoni Mela print from Stark. And above her bed is neon sign—in bright pink, of course—spelling out Ruby Lou Lou, custom-made by Name Glo.

One-year-old Esme may not have had much of a say in her decor, but her room is a mix of soft pinks and grays with a leopard-print carpet, already prepared to be just as chic for her teen years as babyhood.

Charnas and Matt brought her dream of a serene master bedroom to life, which she now calls her “favorite room.” The room eschews warm tones for bold grays, blacks, and whites. The centerpiece is a chrome four-poster bed from Bernhardt. A globe pendant light from Tom Dixon amps up the modernist vibe.
Designer Matt inserted a bit of color, however, with the velvet aqua drapes, which were made with custom fabric from Carleton V. The result is a space that Charnas never wants to leave.

A fashion influencer’s life is certainly more glamorous than most, but Charnas still values family above any other commitment. Floating shelves in the living room show off treasured family photos.

We hope you liked our article. Feel free to pin all the images to your favorite Pinterest board. Meanwhile, you can also visit our Pinterest boards to get more inspiration.

How to play Haus with the new and coolest playhouse

The Pink House in Vietnam, by 23O5 Studio – Be Connected with the Sky

Pools Design – A Must-Have For The Upcoming Summer

10 Living Room Ideas To Make a Statement In Your Home