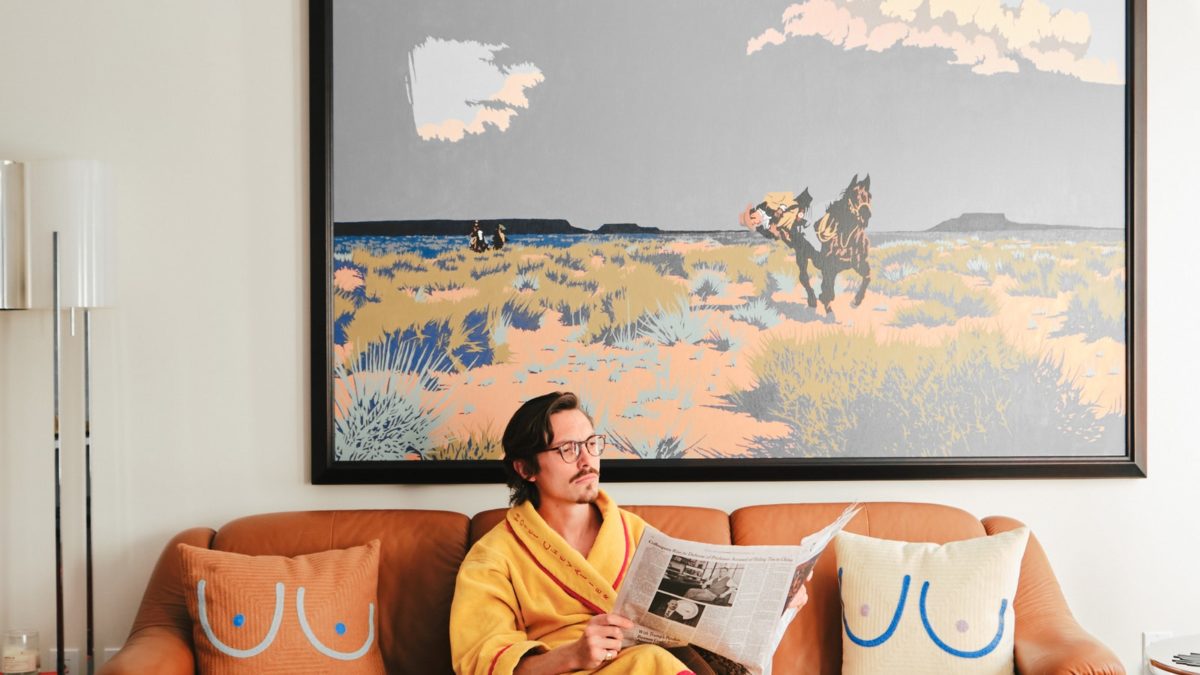 Last February, Marc signed a lease on this two-bedroom, two-bath apartment in the Seaport district, which features views of the East River. Marc Rebillet’s light and airy two-bedroom apartment in Lower Manhattan is clean and pristine, featuring statement art, vintage finds, and even a couple of trophy pieces that give the space a personality.

The 32-year-old musician’s space was larger than his previous tiny apartment in Nolita, which meant a furniture-buying spree was in order.

Marc Rebillet had the help of his friends, Gus, who showed him options for a modern design and helped with the decoration process. It was even Gus who suggested Marc the iconic Togo sofa by Ligne Roset for the first time, and he knew he had to take it home. Three, by the way!

Marc took a set of three Maraschino cherry-colored Togos to his living room, combining them with a Pierre Paulin Groovy chair covered with its original bouclé upholstery. With a chrome coffee table and a half-moon mirror, the room receives a shake of mid-century futurism.
For some, the final results may even remind the captain’s yacht, Star Trek: The Next Generation, of which Marc is a fan.

He then converted the second bedroom into his home studio. He looked for a giant desk, which holds his keyboard, loop machine, laptop, and streaming gear — closely re-creating his touring setup at home.

His bedroom, though, is like an all-new different thing, in a good way. Minimally furnished with abundant natural light, it feels like a space away from it all. Natural wood tones from the birch Floyd bed frame and vintage Kipp Stewart and Stewart MacDougall console warm up the white walls and bedding. The walls are hung with abstract pieces by Verner Panton and Scott Sueme.

As for the location of his signature robes (real Loop Daddy fans know), do not be concerned – his dozens of silk robes live in one closet, while the comfy, terrycloth ones are in another.

Marc loves how the Angelo Brotto floor lamp’s nautical look plays well with the apartment’s location, which has views of the river. “It just works in the bedroom because if you’re looking out that window, you see the ships and you see the river,” he says.

He also initially created a dining nook—a small table and chairs—adjacent to his kitchen, but found it was rarely used. So he swapped the table for a white Roland keyboard that he plays every day, framing it with a sleek floor lamp and midcentury-esque armchair. “It’s the best thing,” Marc gushes over the instrument.

Marc Rebillet’s advice is to not forget to add personality—it’s all about the little things.
Living in a newly constructed apartment like Marc’s doesn’t mean your space should feel sterile. Fill your shelves with tiny sculptures or top your coffee tables with a couple of charming knickknacks to keep your space feeling clean while still adding touches of personality.

We hope you liked Marc Rebillet’s Manhattan Apartment. Feel free to pin all the images to your favorite Pinterest board. Meanwhile, you can also visit our Pinterest boards to get more inspiration.

Also, get more ideas for your projects and find functional, stylish, and sizable lighting and furniture choices:

Inside a tailor-made apartment by Frédéric Crouzet

Alexander and CO. Studio - Where They Work and Why It's So Inspiring

Inside a Richly Detailed House With a Much-loved Garden

How And Where To Find Stylish Luxury Pet Accessories?