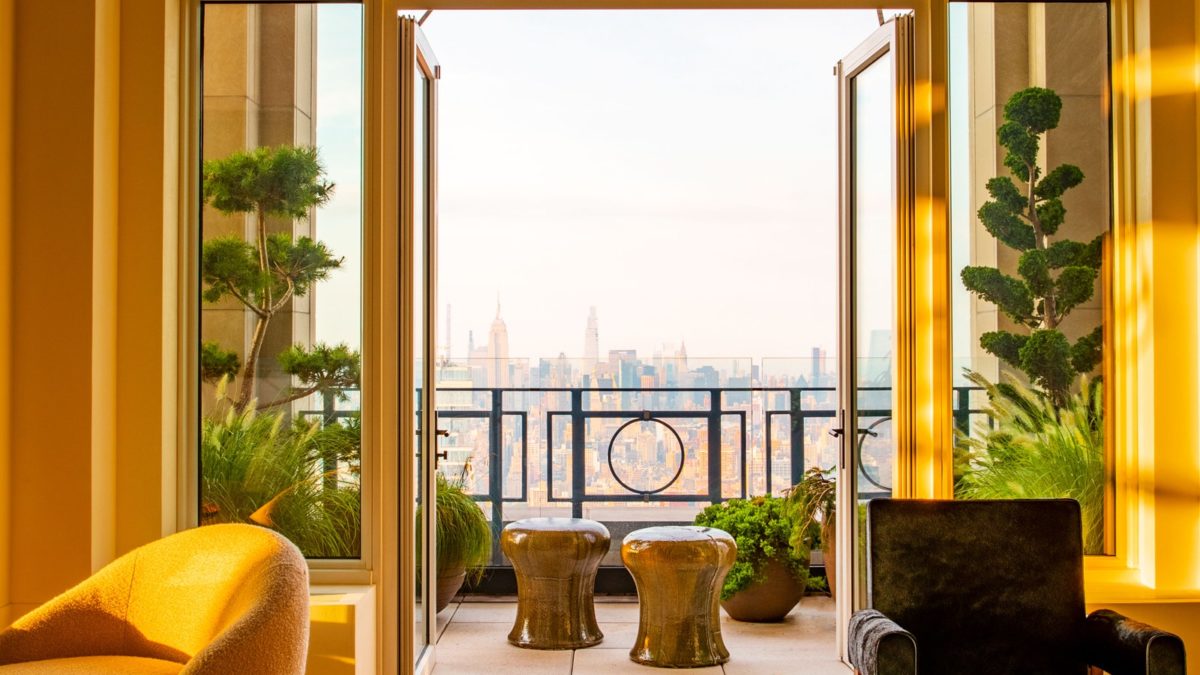 Take a look at this Tribeca Apartment that offers panoramic views from the East River to the Hudson. It has the hand of the AD100 Designer Monique Gibson.

Monique Gibson is an interior designer that works with top clients and she had seen everything. Until she went to the terrace of this amazing penthouse in Tribeca that left her speechless. “You know what it’s like when you walk into a great cathedral and you’re suddenly struck silent?” recalls Gibson. “It was like that! I just stood there, dumbfounded,” she says. She also added that this was the apartment with the best view of the city.

So, of course, it was the view that took her clients’ hearts, a couple with two children. The husband said We looked at a lot of places, but nothing compared,”. They knew that once the apartment had everything they owned, it will feel like home. This Tribeca Apartment is 800 feet up in the sky, and has 6,000 square foot space.

The Apartment with the Best View of the City

Monique Gibson had a tough challenge for this apartment, because she wanted to translate the feeling of artistic urbanity to a classically propelled recently built high-rise. Within the living room, the formerly strong walls on either side of the fireplace were supplanted with dark steel-framed windows, uncovering the staircase and imbuing more of a loftlike openness to the space.

Although the main rooms had concrete floors, the dining room has a gray-and-black-speckled terrazzo that offers a industrial style, but with polish and visual interest. However, the bedroom need to be warmth, so in order to do that, Monique added upholstery and rugs to give texture.

The couple said that one of the best parts of decorating the apartment was that wanted to knew all the artisits and artisans that were behind their furnishings and they learn a lot. Most notably they made a virtual visit to the County Cork, Ireland, studio of craftsmanship and furniture producer Joseph Walsh, who built their sculptural walnut dining table. “It’s probably our favorite piece in the apartment,” says the wife. “We still call it ‘Joseph’s table.’ ”

One of the most important parts of this Tribeca Apartment is the terrace and the large windows. Monique said, “When you walk into the apartment, you are pulled in straight through to the windows like a magnet,”.

We have fallen in love with this apartment, so what about you?

The Apartment of Dreams - A Romantic Place in St. Petersburg

The Pink House in Vietnam, by 23O5 Studio – Be Connected with the Sky

Inside The Most Stunning Yacht Ever Designed

How To Arrange a Modern Entryway With Impressive Art Works